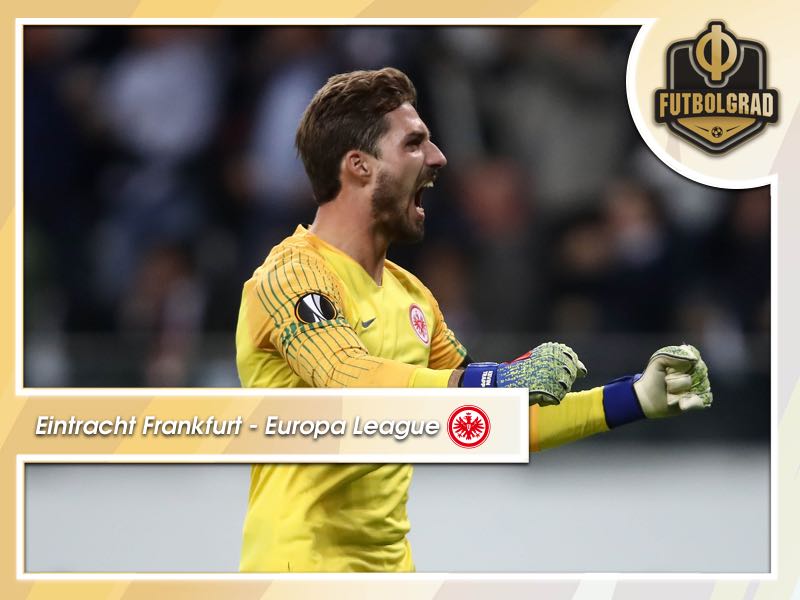 Magic continues on a memorable night in Frankfurt

Eintracht Frankfurt’s dream run in the UEFA Europa League continued at the Waldstadion in Frankfurt with a 2-0 victory against Benfica. The victory secured a 4-4 aggregate win on away goals following Benfica’s 4-2 win at the Estadio da Luz in Lisbon.

Eintracht overcame adversity against Benfica with an unlikely hero, a man of the match performance from Ante Rebic and the Frankfurt supporters who continually prove to be among the best in world football.

The Portuguese club were the latest high profile casualties to wilt under pressure in Frankfurt. Next up are Chelsea but none at Eintracht think it a bridge too far or beyond their capabilities as they contest their European semi-final in 39 years.

Frankfurt head coach Adi Hütter had to do without two central defenders with Martin Hinteregger injured, and Evan Ndicka suspended. In came Simon Falette who was making his first appearance since 26 January, there were concerns he might be underdone, but he quickly made his mark on the game.

Early interceptions and positive link up play with Filip Kostic gave Falette confidence that continued throughout the contest. Up against Rafa Silva who had come off two goals and an assist against Vitoria de Setubal, Falette held his own and forced the Benfica winger to skew his shot wide at the end of the first half.

Captain David Abraham was full of praise for his teammate: “Simon Falette’s performance was unbelievable considering he hasn’t played much recently.” Manager Adi Hütter also singled out the French defender: “Simon embodied all the qualities that set us apart.”

Falette ran himself into the ground and was substituted off late but had enough energy to describe the performance: “I was a bit tired, but we played well today. Playing for the first time in three months wasn’t easy for me, but our performance was very good, and we’re in the semi-finals. My team-mates really helped me find my way into the game. The coach told me to play my normal game. I’m always ready and am happy to have helped my team today.”

Falette’s performance was indicative of a team that have continually shown belief, confidence and an inability to give up. Frankfurt’s chances in this tie appeared slim when Evan Ndicka was sent off early in Lisbon and João Félix converted the resulting penalty.

Star striker Sébastien Haller was out with an abdominal strain, but the remaining three strikers stepped up in his absence. Ante Rebic and Luka Jovic combined to score an important equaliser, and Gonçalo Paciência came off the bench to score what appeared to and turned out to be a crucial goal in a 4-2 defeat. 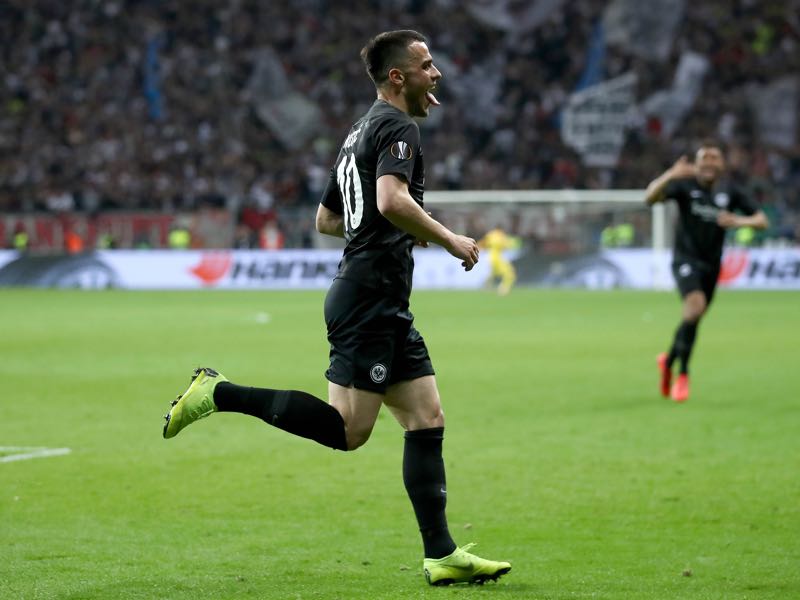 Paciência said his team were stronger than Benfica after the first leg and had more praise in Frankfurt: “We deserve it, it was a fantastic night for us. The crowd help us a lot, and it’s a night that will always be on our minds for the next years. This is amazing, the fans and the choreography that they did; it’s fantastic for us. I don’t have words to describe it.”

Ante Rebic hasn’t been able to match the exceptional productivity of Haller and Jovic this season, but his importance and ability to inspire his teammates came to the fore over both legs. The Croatian was Eintracht’s best performer in Lisbon and was clearly man of the match in Frankfurt.

Rebic took control of the game and was the main creative force. He continually involved his teammates in dangerous attacking sequences that led to goalscoring opportunities. Rebic initiated the move that resulted in Frankfurt’s opener and was on hand to provide the assist for Sebastian Rode’s goal.

His attitude has come into question after successive cautions for dissent against Benfica and Augsburg. Rebic was shown ten yellow cards in his first Bundesliga season in Frankfurt and earned eight last campaign, demonstrating a combative approach that often crosses the line. 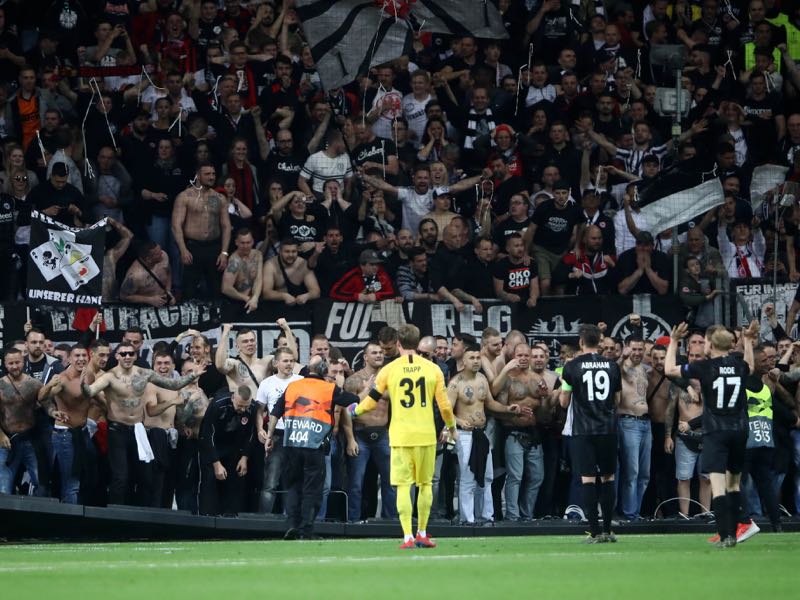 When he harnesses his rage and channels it through the ball at his feet; however, he is indispensable, and there are few more influential. Adi Hütter said that Rebic “was the best player on the pitch” and who could disagree?

Eintracht’s Group H opponents were not to be taken lightly with the exception of Cypriot club Apollon Limassol. Frankfurt stormed through after winning all six group games including doubles over Lazio and Olympique Marseille.

Key to their form was their incredible support at the Waldstadion where Lazio were dispatched 4-1, Apollon fell 2-0 and Marseille felt the full force of Frankfurt’s 12thman in a 4-0 thrashing.

It would get no easier against three clubs that had all parachuted into the Europa League from the Champions League. Frankfurt allowed ten-man Shakhtar Donetsk back into the tie after a 2-2 draw in Ukraine but were scintillating at home, winning 4-1 with Haller, Jovic and Rebic on the score sheet.

Shakhtar had a pedigree in the competition after winning the 2008/09 UEFA Cup, and it would get no easier in the round of 16. Inter Milan have won 18 Italian league titles and won three UEFA Cups before lifting the Champions League in 2019/10.

Kevin Trapp saved Marcelo Brozovic’s penalty midway through the first half the first leg at home in but it was largely one-way traffic from then on. Frankfurt dominated the remainder of the match that ended 0-0 before going to Italy and securing a 1-0 win at the San Siro.

Portuguese powerhouse Benfica were next as ten-man Eintracht showed tremendous courage to claw their way back to a 4-2 defeat in Lisbon. It provided the belief to go on with the job which was achieved in style, partial redemption for the 5-5 aggregate defeat against Porto in the 2013/14 Europa League round of 32.

Next up is Chelsea FC, 2016/17English Premier League champions, 2011/12 Champions League winners and 2012/13 Europa league winners. Only Chelsea (30) have scored more than Eintracht’s 28 goals in the competition, but the German club have no fear.

Asked about their chances against Chelsea, Paciência showed Frankfurt’s fighting spirit: “Let’s dream, let’s work and fight. That’s our goal, to fight, fight, fight.” Danny da Costa was also upbeat: “Everyone knows that Chelsea is a top team in Europe, after the games, we have played I think we have a good chance to reach the final. We got there with a lot of confidence and a lot of respect.”

The Eintracht Frankfurt supporters have been incredible during the Europa League campaign. Creating unforgettable choreographies at the Waldstadion and travelling in their thousands to every away match, they have regularly outnumbered and been more vociferous than the stunned home support.

Vice-Chairman Axel Hellmann was full of praise after the match: “I’ve been going to Eintracht’s home games for a very long time, but I can’t remember experiencing such a sizzling atmosphere at the stadium. The atmosphere has been brilliant throughout our Europa League campaign, but today topped the lot. It was a historic evening. Semi-final, Europa League, Chelsea, Stamford Bridge – it really is something to savour.”

There was a moment in the second half when the home crowd’s incessant chanting indicated a second goal was inevitable. Rode prophetically struck minutes later which seemed to signal an intervention from Frankfurt’s football gods.

The players regularly praise their fanatical home fans, Paciência said “they help us a lot, and it’s a night that will always be on our mind for the next years. This is amazing, the fans and the choreography that they did its fantastic for us. I don’t have words to describe it.”

Head coach Adi Hütter reacted similarly: “What the team did was amazing; the tifo and atmosphere helped create a memorable European evening. We soaked up the emotions of the fans, who have been an important factor in our entire Europa League campaign.  They are our twelfth man!”